It’s been a long time waiting for a lot of red tape to clear up and a surgery to undergo (one year and four months, to be exact), but today my brother and I finally got our first dose of Spinraza (nusinersen), the first drug approved to treat spinal muscular atrophy.

I prayed for this day often as a kid but never seriously thought it would come. It is not a cure, but it is a treatment that has been shown to prevent much of the progression of SMA and to improve strength in many cases. It has mainly been tested on children, and by the chatter I hear, it has been slow going for adults trying to get access to the drug. This is largely because of insurance companies resisting to pay for it, as was our case. After three denials, we got funding through Biogen’s free drug program.

Another reason for the delay in some adults, including us, is that the spinal fusion we received as kids to prevent spinal curvature blocks all entrances for lumbar punctures, the method through which Spinraza is administered. Various strategies have been used to circumvent the spinal fusion and deliver the medicine. I can only comment intelligently about the strategy my doctor and surgeon used, and I’m led to believe Blake and I are the only ones who have had Spinraza delivered this way. So I offer an explanation here for the curious, as well as adults with SMA out there who also have a fully fused spine. 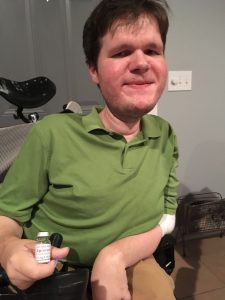 About a month ago, a surgeon drilled a hole in our lower fused spine to make an entryway. But instead of injecting the drug there, he placed an Ommaya reservoir, which usually goes in one’s head, on our lower rib cage, right under the skin. A catheter, usually used to go from the reservoir into the brain, wraps, instead, around to the lower portion of our spine, where it enters and goes all the way up the spine until it reaches the top, close to the neck (thorax?, thoracic cavity?… something like that). This is supposed to make the treatment even more effective than if injected into the lower part of the spine, as happens with a regular lumbar puncture. The primary benefit, however, of the Ommaya reservoir is that is makes getting the multiple doses of Spinraza a simple, in-office procedure. No need to do a lumbar puncture for every dose. The doctor simply sticks the Ommaya reservoir on the rib cage with a butterfly needle, withdraws 5mL of spinal fluid, replaces it with 5mL of Spinraza, and puts back a couple of mL of your own spinal fluid in order to push all the medicine in the catheter out into the spine. Gotta be sure and get all of it!

There are four loading doses in the first two months, and then a maintenance dose every four months thereafter. So having the Ommaya reservoir right there under the skin is extremely convenient. I will say, though, that the surgery to initially place the reservoir and catheter wasn’t as easy as it was supposed to be, but with SMA, we expected there might be difficulties.

It’s been almost 12 hours since my first dose. Not feeling any different yet, but hopefully it won’t be long :-). I’ll be writing an update on this in a few months, I imagine.